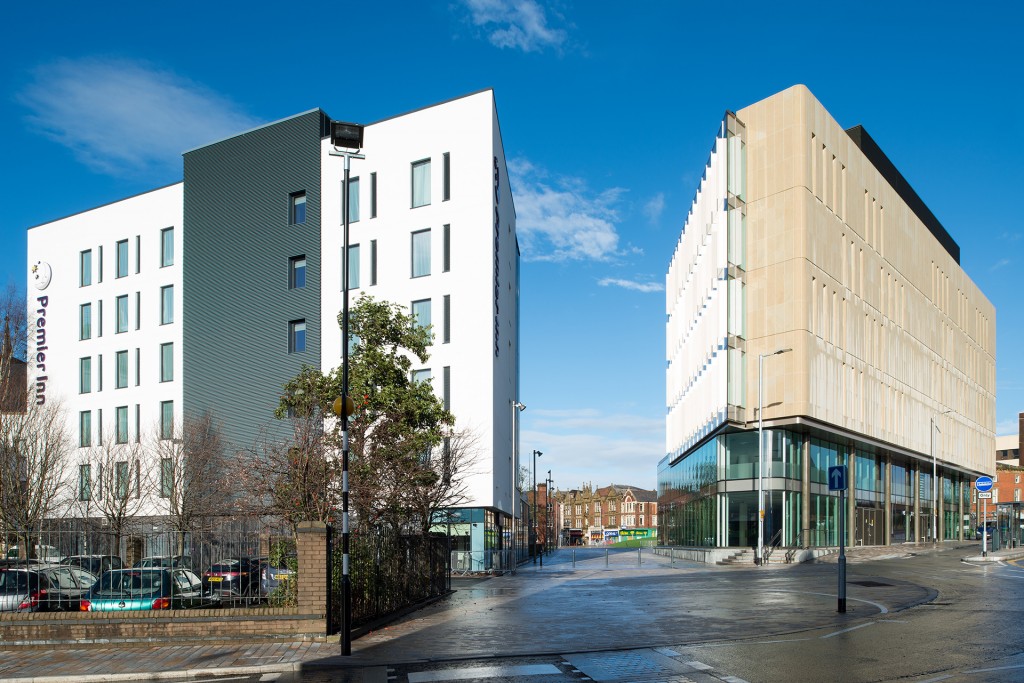 Eric Wright Construction has completed the first phase of a new 200,000 sq ft mixed-use commercial quarter in the heart of Blackburn.

A new Clergy Court also provides offices, library, apartments and townhouses, together with a public refectory for the Cathedral, with these new cloister buildings being the first to be constructed in the UK for more than 600 years.

The £30m town centre regeneration project was pioneered by Maple Grove Developments, Blackburn with Darwen Borough Council and Blackburn Cathedral with the support of the European Regional Development Fund (ERDF) and the Homes and Communities Agency (HCA) and took two years to complete.

The Premier Inn hotel and 3,500 sq ft restaurant was sold to Knight Frank Investment Management on behalf of Lancashire County Pension Fund for £4.8m in September 2015.

One Cathedral Square also has two ground floor units to let, which along with the leisure unit, are being marketed by Brady’s of Manchester. Trevor Dawson and Knight Frank are letting agents for the office space.

“The project is an excellent example of private sector businesses working in partnership with a local authority to deliver a significant urban regeneration scheme. It will create considerable advantages for the town including inward investment and increased financial benefits from an enhanced night time and visitor economy.

“It has also created a high-quality business hub in the heart of Blackburn that will deliver much-needed jobs, with One Cathedral Square being the first Grade A office building to be completed in the town centre for 20 years.”

Executive member for Regeneration, Councillor Phil Riley, said: “This is a real milestone for Cathedral Quarter and for the regeneration of our town centre.

“Over the last few years despite the tough economic climate we’ve stuck to our commitment to drive forward several major investment projects and I’m delighted to see these plans coming to fruition.

“Cathedral Quarter alongside the other schemes such as the new leisure centre is contributing to an almost complete transformation of our town centre so that we can be confident we have a vibrant and modern environment to welcome visitors, shoppers and potential new investors. It’s also going to provide a boost to local employment by creating jobs. ”

Karl Tupling, Executive Director North West at the HCA, said: “HCA has been working in partnership with the Council on the Blackburn Cathedral Quarter scheme for over 5 years, so it’s great news that this project has now finally reached completion. At the start of the project the HCA invested £5.1m of public funding, which acted as a catalyst to help unlock the fantastic development which we now see today. Blackburn Cathedral Quarter has helped to transform the Town Centre and is a great example of regeneration and successful place making”

One Cathedral Square was officially launched on 12 November 2015 Jack Straw. He said: “Cathedral Square has transformed before our eyes and I’m sure that those that site their businesses here will have their commitment will be rewarded.

“I’d like to extend special thanks to Eric Wright and Maple Grove which have served us well and deserve special plaudits. This now feels like a city.”